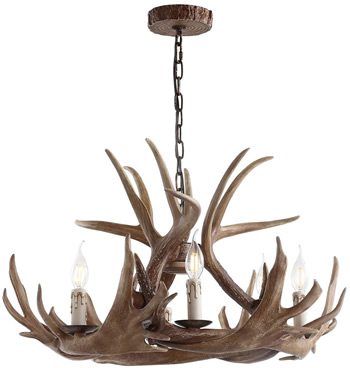 I overheard a couple in a lighting store super offended about an antler chandelier. It wasn’t even natural antler, it was made from cast resin.

They thought that deer had died to make the chandelier.* They compared it to killing elephants for the ivory. 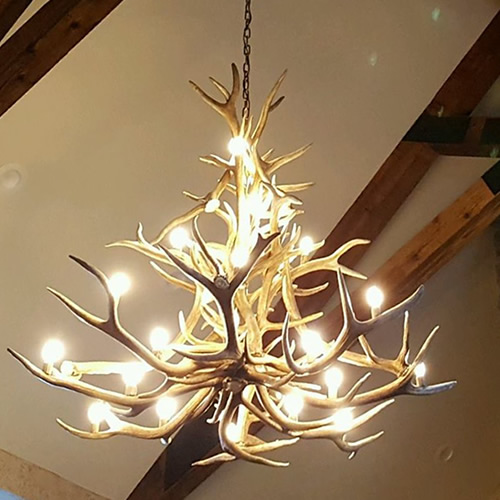 No, deer do not die to make chandeliers. Deer shed their antlers every year. Even lighting made from real antlers doesn’t hurt the deer. 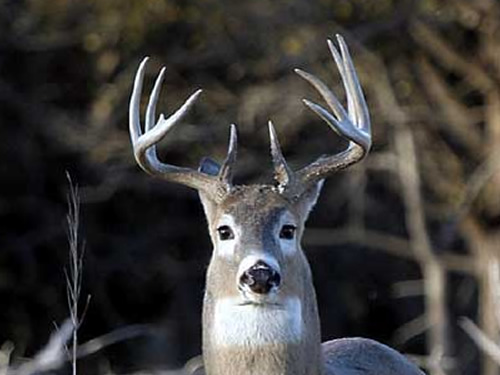 Antlers are shed and regrown every year. People collect them and use them to make chandeliers, other lighting, furniture and other things. 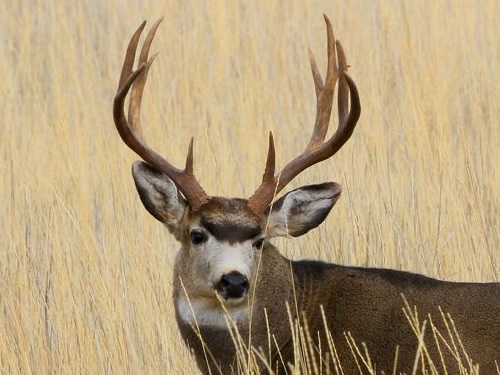 Lighting is made from the shed antlers of Whitetail Deer, Mule Deer, Moose and Caribou or Reindeer. 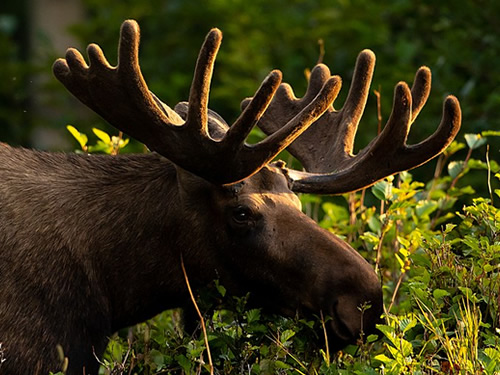 The antlers are collected and assembled into lighting by skilled artisans. 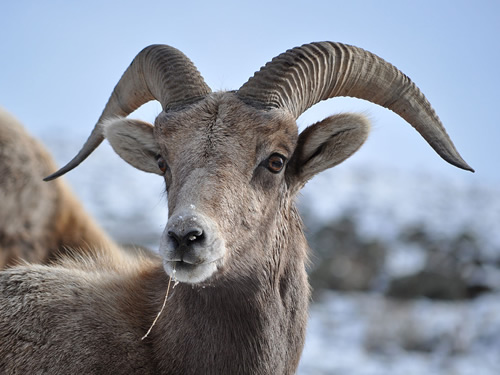 Big Horn Sheep has horns that are not shed
Photo by Jack Barrie, Oregon Department of Transportation

Antlers are not like horns. Horns are not shed. Sheep, goats and cows have horns. 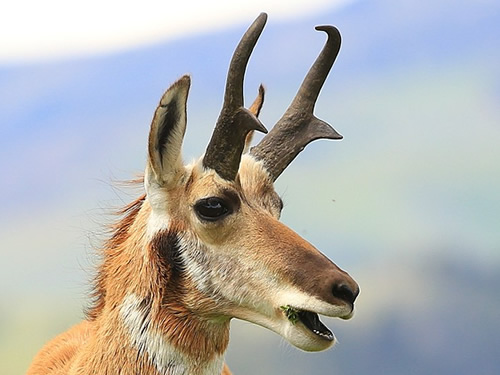 Pronghorns don’t have horns. What we call horns on a pronghorn is a skin covered bony core with a keratinous (like fingernails) sheath. They aren’t Cervidae (deer) and they aren’t Bovidae (sheep, goats and cattle). 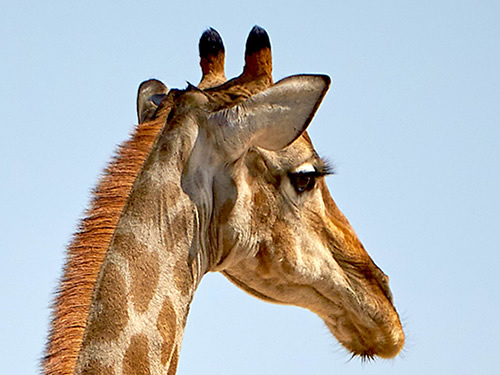 Pronghorns are actually Antilocapridae in the super family Giraffoidea. Like a giraffe. 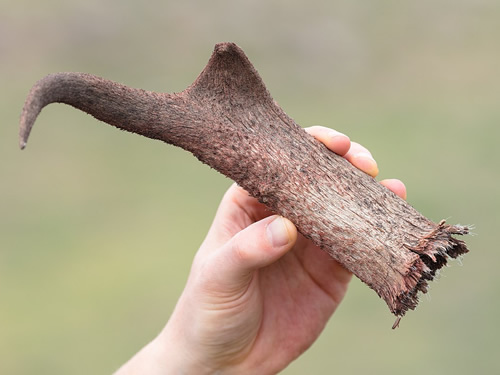 Pronghorns shed the keratinous sheath antler/horn every year. (Giraffes only have the skin covered bone. They don’t have the sheath and they don’t shed anything.)

Pronghorns shed from October through December. New horn sheath starts to grow underneath the old horn, and kinda pushes the old horn off. 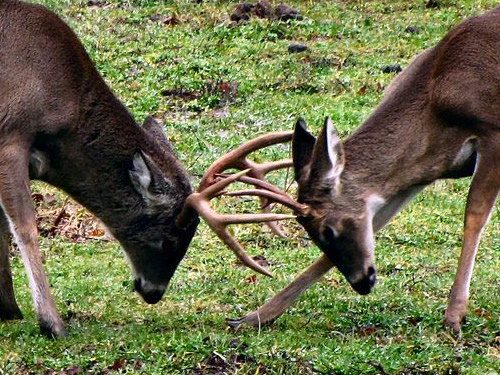 Deer, elk, and moose shed later in the winter, after they are done using them for the year. 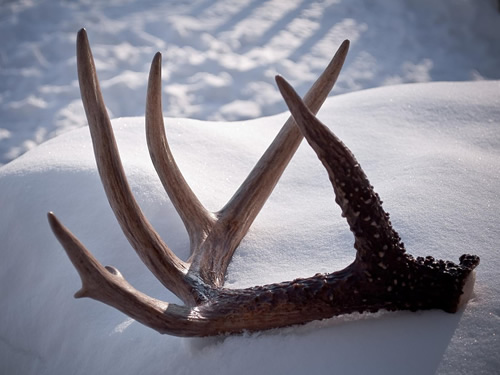 People hunt for the discarded antlers from the middle of December to around the middle of February. The sooner the antlers are found, the better condition they are in and the more they are worth. Antlers in good condition sell for around $10 a pound. As they weather, they are worth less. Matched sets are worth the most, if they are in good condition. Deer don’t shed both antlers at the same time, so it is hard to find a matched set. 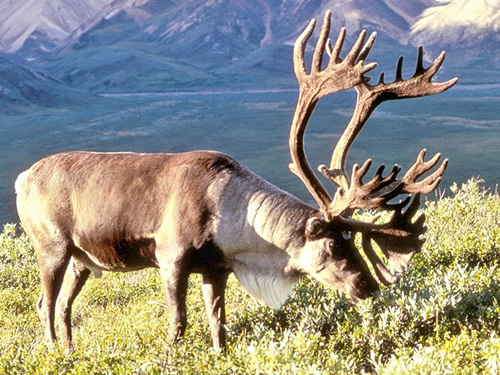 Antlers Chandeliers are used in Rustic, Southwestern, Lodge, and other decorating. They make a real statement.

Antler chandelier made with resin can look really good and don’t have to cost much. They are available at a lot of different prices.

You will pay significantly more for a chandelier made with real antler. These chandeliers are made by craftsmen. They are an art. It’s not just the cost of the materials. There is a lot of skill and time put into selecting just the right antlers and making them look good. It takes skill to make them balanced to hang straight. 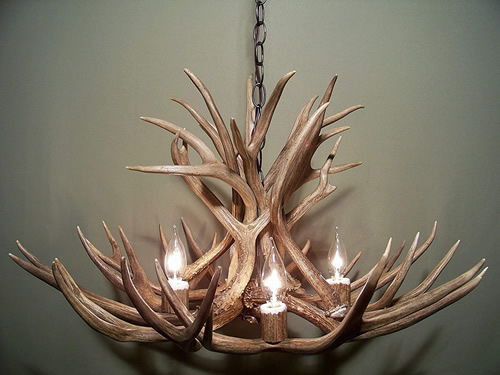 All of my antler chandeliers are hand crafted from genuine deer, elk, moose and fallow antlers. No fake plastic resin antlers! Each and every work of art begins with the finest quality REAL shed antlers available. The antlers I use are “shed antlers” which in turn means no animals have been harmed or harvested in the antler collection process. Deer and elk naturally drop their antlers (shed) seasonally in order to grow new and larger antlers during the spring and summer. The wiring for my chandeliers is fully concealed within the antlers themselves, they feature candelabra sockets that are rated to 60 watts each, genuine elk antler socket covers, antique brass chain and finished off with an antler burr on the bottom. All of my chandeliers are built to last, fully tested, hang level, screwed together and every hole is carefully filled and blended in to match the antler making them virtually undetectable. A true work of art with the utmost attention to detail is what sets my chandeliers apart from the others and they are designed to last a lifetime. I specialize in and have a passion for creating gorgeous quality built chandeliers at a great price that are second to none.

You can see more antler lighting on Deep Discount Lighting.

*Antlered heads are turned into trophies.