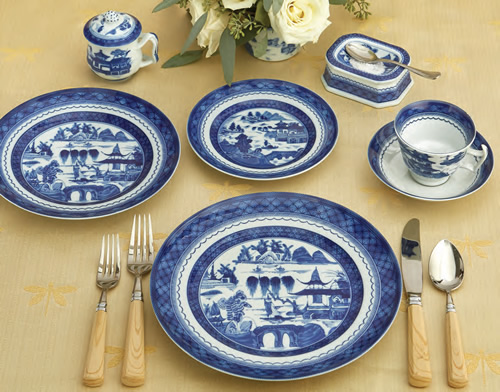 I was helping someone identify what they thought was Blue Willow china and found this beautiful collection, Blue Canton by Mottahedeh.

The most fashionable tables in early American Republic were set with blue and white “Canton” or “Nanking” wares, named for the great Chinese trading ports from which they came. Chinese blue and white porcelain was in demand in this country well into the nine-teenth century and has become a part of the heritage of many American families. Blue Canton faithfully recaptures the centuries-old tradition and taste.

The collection has so many pieces and they are all just stunningly beautiful! These are the product numbers and sizes for what is in the photo above, if you are trying to identify it. 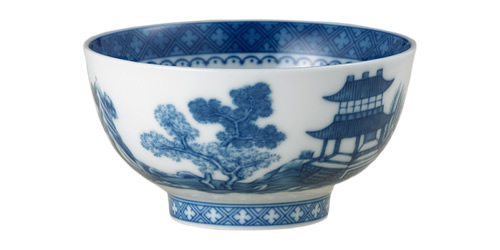 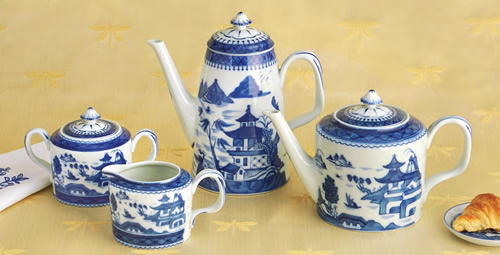 Recognized by the blue lattice border surrounding a variety of landscape scenes, this popular Chinese pattern inspired a number of European versions, most notably English stoneware.

These are the sizes and product numbers for the Blue Canton Coffeepot, Teapot, Creamer and Sugar Bowl with Lid. 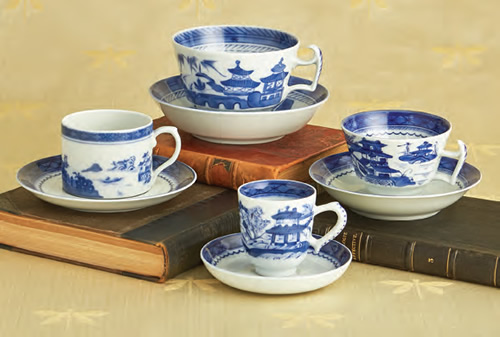 These are some of the sizes the cups and saucers come in. 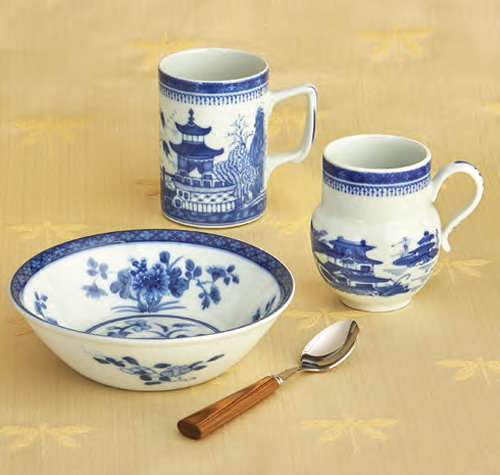 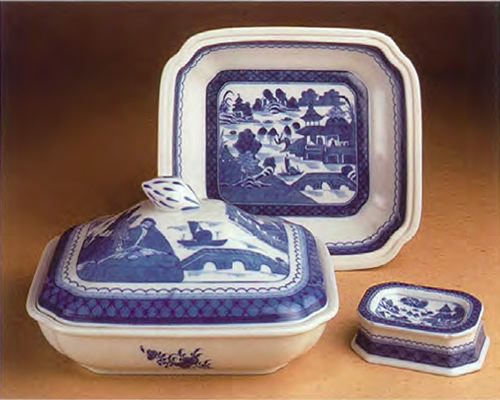 Here are just a few of the serving pieces. The Covered Vegetable Server is leaned up so you can see the pattern on the inside. 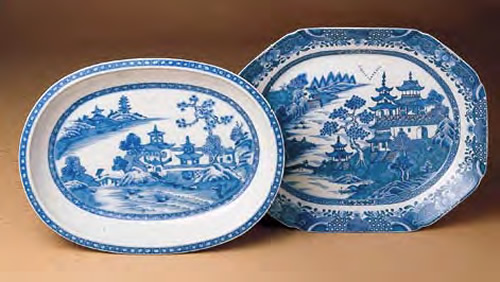 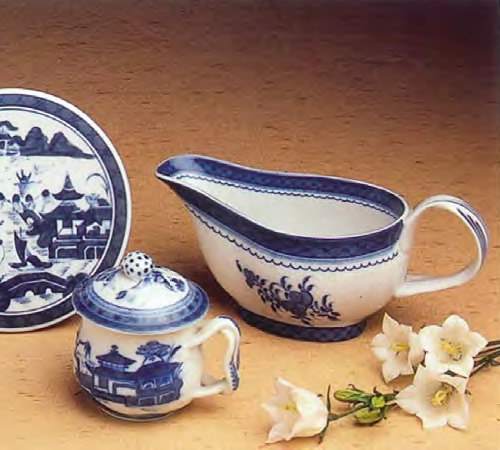 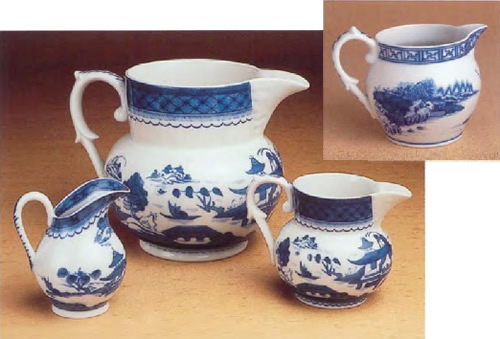 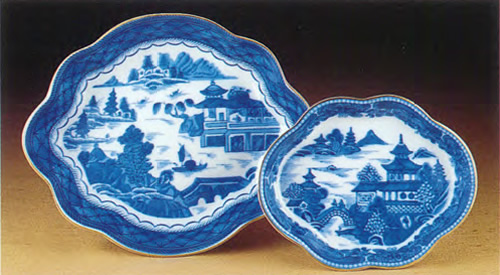 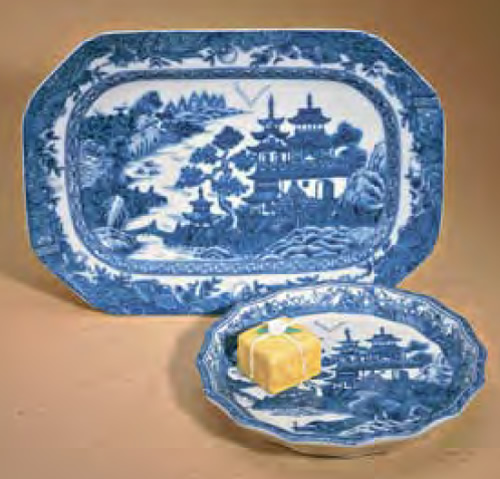 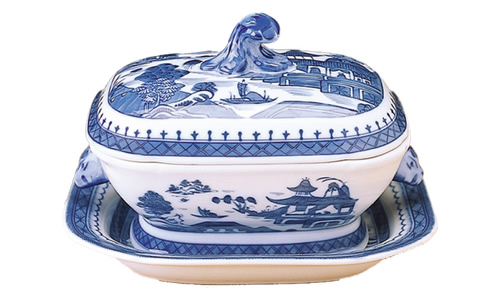 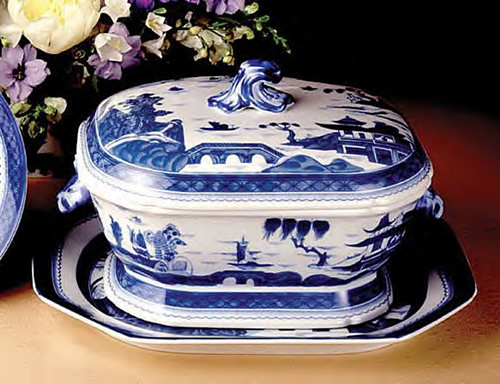 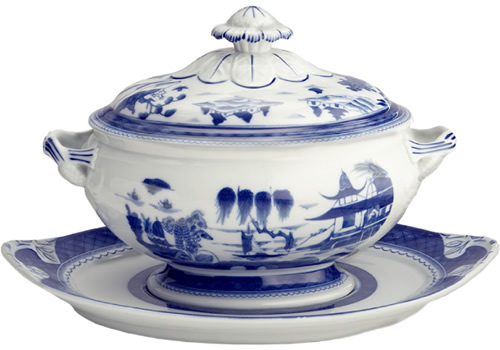 Mottahedeh makes high end reproductions of historic ceramic designs. They license authentic fine china reproductions from the Metropolitan Museum of Art, the Colonial Williamsburg Foundation, the Historic Charleston Foundation, Mount Vernon, Winterthur Museum and Gardens, Monticello, and Tony Duquette. They have made commissioned to make official state china for the White House, the U.S. State Department, and the Diplomatic Corps

Mottahedeh Blue Canton is made of hard porcelain faience. Faience is not fired at a slightly lower temperature. The white is whiter, less translucent. Colors stand out more.

Faience goes back to Assyria, Babylonia and Egypt, but the name comes from the Italian city of Faenza, where a lot of this china was made.

Josiah Wedgewood developed a consistent process producing high quality faience in England in 1759. A white porcelain clay is fired, cooled, decorated, then glazed with clear and colored glazes. Sometimes gold or other decoration is applied over the glazed surface. Most faience sold today uses this method.